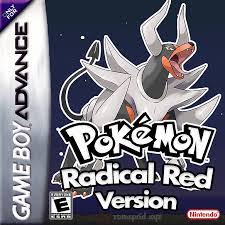 My Fairy Type Gym Badge (thanks to icycatelf) 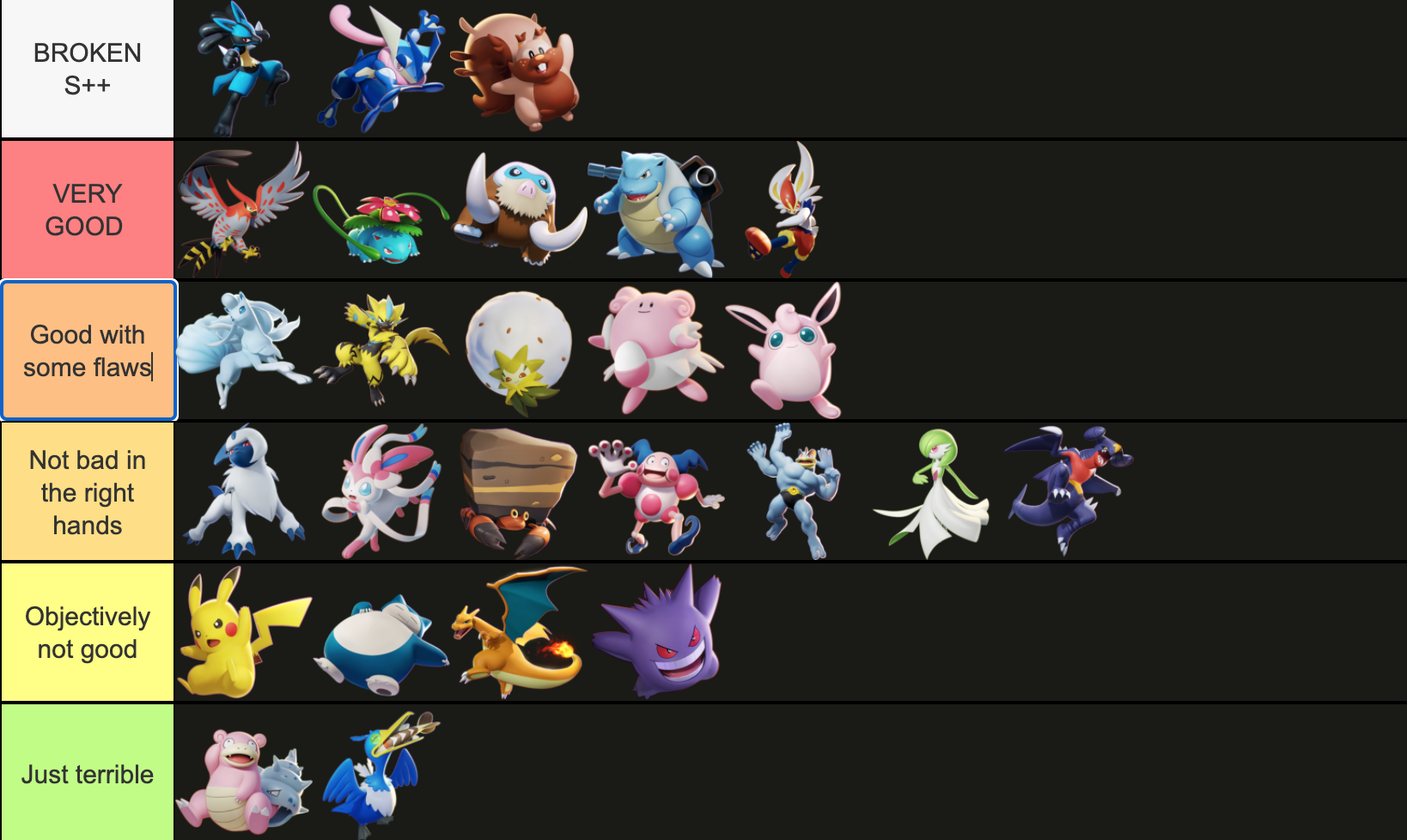 To preface this tier list I'd like to say I've been playing this game almost daily, and certainly weekly since launch. It's been a great game, with many balancing issues and many more game breaking pathes, I still enjoy playing. I am currently Ultra 2, so I can claim to know everything, (and neither could anyone else period) however with my experience I hope to explain why my tierlist is the way it is!

In this tier there is little to no counterplay, and these Pokemon can steamroll entire teams alone.

Starting with Lucario, the best character in Unite. His passive allows for an insane amount of survivability especially early game where gaining EXP and scoring for EXP play greatly into the first snowball effect of the match. On top of his passive, his damage output is very high, and his lack of evolution means his powerspike is somewhat distributed evenly throughout levels unlike evolving pokemon. His Power-Up-Punch was once his go to, and now is tied for use with Extreme Speed. Both are insanely versitile dashes/executes/objective stealing moves, with little or reseting cooldown. His Bonerush ability allows for tricky plays, and insane escapes on low health.

Next we have Greninja. He is extremely strong, with both Surf and Water Shuriken being excellent killing moves. Where Greninja steals the "BROKEN" title is his Double Team Ability. This move forces enemies to target his clones due to their low HP pool, and allows Greninja to dash (through walls). Ontop of this, its cooldown starts as its activated, allowing for a shorter cooldown than listed, as by the time the clones are gone (if not KO'd) the move is almost up again. The clones do insane amount of damager, especially for an "enemy" you get no reward for killing, and infact players are PUNISHED for targeting as the real Greninja can escape or stall for Surf/Water Shuriken. This is free damage for Greninja, ontop of being an almost perfect get away card.

Now to Greedent. Unsuprisingly the newest addition is broken once again. If his high damage with Belch, combined with his mobility with Covet werent enough, his ultimate grants him an infinate cooldown refund on his abilities and this allows for Belch spam. It's unclear if this was intended on the developers part, as we've seen Sylveon get nerfed because of "unintended" damage numbers. Needless to say, being able to solo Zapdos in les than 15 seconds is Broken.

Less time will be spent in this tier as the damage numbers speak mainly for themselves.

Talonflame is the highest damaging Attacker, with pure burst potential. This Pokemon can burst almost any pokemon in just a few seconds, and is excellent in stealing objective, and escaping KOs.

Venusaur was insanely broken, however with the recent nerf, his survivability off Petaldance/Gig-Drain has gone down just enough that he can no longer 1v4. However this combo is still deadly, and if not CCed properly he can KO and heal off of it mulitple times.

Mamoswine is the best defender hands down. Insane CC, goal slowing, and his ability to stack insane defence makes him the perfect carry killer. His laning phase is as good as lucario and pikachu, with abilities that can overwhelm opponents who overreach, and his tackle allows for quick possitioning, which is common in top tier Pokemon.

Blastoise is a very good defender, with more damage than most attackers. His ultimate is a free kill on one, or more opponents. His rapid spin allows for Unstopable CC, and his tankiness makes his unkillable to low damagin Pokemon. In lane his shoves get major points, as poor positioning can kill many squishier Pokemon very quickly.

Cinderace is the best auto-attacker in the game. With an insane attack speed, and high attacker she can shred most opponents very quickly. Her Feint ability makes for a free escape card, with the bonus of healing.


Good with some flaws

In this tier im going to mention the flaws rather than the positives, as these are all around good Pokemon, but the flaws are what keeps them out of VERY GOOD tier.

Alolan Ninetails is very squishy, and a glass canon. Her ultimate lacks the damage and garunteed CC that other similar ultimates like Blastaoise have. Their passive, Snow Warning, reveals themself as a nearby opponent will trigger it even if Ninetails is in a bush. She has no mobility options, and will be KO'd if caught without teamates to take advantage of her CC.

Zeraora has flaws only in his currently glitchy state. Constantly getting teleported into walls, and with "flick back" on pro controllers, his dashes will often miss, even as targeted moves, and land on wild Pokemon instead.

Eldegoss is useless without a high damaging Pokemon, but makes a great support. Her only flaw is being played incorrectly, as choosing the less meta abilities will often make that teamate worse off as an Eldegoss. Her survivability is great, however her damage is very lacking.

Blissey is the worse healer of the two, having to stop moving to cast her Softboiled means she often falls behind her team in chases. Her Passive cleanse is finiky at best, and her ultimate gets Blissey KO'd more times than not, with the Ally reciving the buff often trying to escape rather than fight. Her heal targeting is deficult to aim, and her Egg bomb ability while fun, is a novelty.

Wigglytuff's only flaw is their lack of consitant damage. Rollout is buggy in aiming, Dazzling Gleam can be easily dodged even by inmobile characters. Her ultimate is useless without Buddy Barrier.

Not bad in the right hands

Absole with the right items can decimate with Critical Hits. With the wrong person playing absol hes a useless dashing machine, often targeting the wrong Pokemon.

Sylveon, once a GOD, shes been nerfed heavily. Her damage isnt gone completely, however with her harsh learning curve in its aim; Swift and Hyper Voice make for less than good damage sources. Under the right conditions Sylveon can outplay many characters with her mobility, but often times shes songled out and KO'd quickly by common CC.

Crustle is a good defender, with a high skill cap, and patient playstyle, however they can be EASILY under utilized and almost useless by a poor player

Mr.Mime holds insane damage, but with skillshots being difficult on console, he lacks consistancy. Dodging his confusion leaves him open and vulnerable.

Machamp' abilities are more suited for team fighting, but often times players assume he is a solo carry type of Pokemon. This mistake is the downfall of many Machamps, and without his team he is a sitting duck with only his Ultimate being his saving damage.

Guardivoir/Garchomp. Save character different plays. Both are hard to achieve their powerspike, but both give reward to those who can.

These pokemon arent bad but they for sure aren't GOOD.

Pikachu isnt good. His voltackle puts a ranged character in melee range. His thunder and Electroball do decent damage early game, but fall off considerably after the first Dreadnaw. Thunderbolt is too slow of a stun to hit mobile characters, and his Ultimate is beyond lackluster, with bad damage, and even worse: Hes completely Vunerable while its casting unlike other Pokemon.

Snorlax. SUPRISE hes not good. On paper hes bad, in game hes bad. Previously a force, Snorlax got very nerfed, and now after the begining laning phase he is only a defender. Other defenders have damage or CC to show for, but snorlax lacks either of those. Yawn being his only decent move.

Charizard has a poor laning phase, and doesnt climb in power like Ralts or Gabite. His only saving grace is his Ultimate, which can no longer be cut short by a finishing move. Recently I've noticed his auto attacks doing more damage, and I think they secretly reversed the Muscle Band bug, however it isn't confirmed so I can't move him up in tier just yet.

Gengar would be good, however with his squishiness, and melee style gameplay ocmbined, it makes for a terrible time attacking anyone who isn't in this tier or lower. His ultimate is just alright, and his ability is unnoticable.

Slowbro has no damage, and little CC compared to better defenders and even some other Pokemon in general. His ultimate is a "Pick one and die". And by that I mean Slowbro picks an oppenent to Root, and then when his ultimate is over, he often dies to them because of the small damage he dealt. Anmesia, and Telekenis are near useless, and it makes him has a single Ability slot.

Cramorant was nerfed for no reason and is uselss now. His hard to hit CC Hurricane no longer can be followed up (damage wise) by his Surf. Dive was buffed, but like Pikachu puts a ranged character in Melee range. Overall no one plays him anymore, and if they do its for his somewhat fun ultimate.

You have reached the end of my page!
If you have any concerns or questions feel free to message me on discord Baby#9914
August 28th 2021 - Infinity